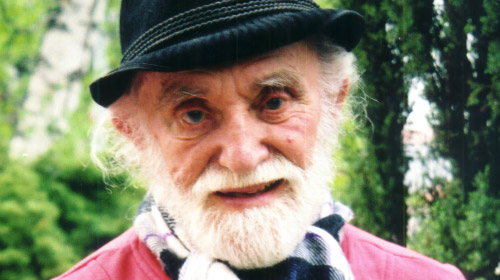 He was born on 25th November 1908 in today‘s Przemysl, Poland to Czech parents with whom he later lived in several European countries. After graduation at the Faculty of Law, he worked first at the Municipal Office in Prague and then in Rakovník where he became a district governor. During the World War 2, he was involved in the resistance against the Nazi occupiers and was persecuted for his beliefs. In May 1945, he led the national revolution in Kladno. After the war, he worked in various offices until 1955 when he was expelled from his job by the communist regime. After some time spent as a temporary worker for various organizations, he found a job at the Railway Construction company.

His spiritual horizon was gradually opening up by means of books that were hard to find at the time. He greatly valued his friendships with renowned spiritual teachers such as Paul Brunton and later František Drtikol, as he recounts in his book Memoirs of a Mystic. His wife Míla Tomášová had a crucial influence on his inner development.

In 1963-70, Eduard Tomáš lectured three cycles: The Art of Peace of Mind, The Yoga of the Great Symbol and The Secret Teachings of Tibet that were received with great interest in the despair of life at that time. Later, when this activity was officially stopped along with onset of the normalization, these cycles continued to circulate as self-published books. At that time, a smaller circle of friends formed around the Tomášes. They kept on visiting them at their cottage in Jílové u Prahy. In this quiet place, the Tomášes were patiently, tirelessly and lovingly passing their spiritual experiences on to them.

After the restoration of democracy in 1990s, the opportunity for public activity emerged and within a few years, Eduard Tomáš became the foremost personality of the spiritual life of these days‘ Czech Republic. Especially his lectures in the Lucerna Palace of Prague were successful in uniting listeners of various spiritual orientations and paths in a common atmosphere of understanding and love.

The name of Eduard Tomáš is currently associated mainly with a number of works with spiritual themes – Milarepa, 999 Questions and Answers on the Path of Knowledge, 108 Meditations, Metaphysical Stories, Yoga of Mindfulness, Introduction to Integral Yoga, The Art of Peace of Mind, Yoga of the Great Symbol, Secret Teachings of Tibet, Spirit in the Mirror, The Mysterious Absolute, The Celestial Path, The Enlightenment, The View from the Other Side, The Way of Love, Let’s Create a World of Peace, Living Eternity – Memoirs of a Mystic II. The Practice of Yoga Philosophy, The Message and Tracing the Golden Age books were co-authored by Míla Tomášová, The Great Magic by Alexandr Popov. E. Tomáš is also the author of the The Paths of Self-Knowledge book – which became the basis for a radio series – and a book of memoirs, Memoirs of a Mystic, which was made into the same name series by the Czech Television. The Way of Realization was another television lecture series. He was also one of the personalities featured within the Czech TV‘s GEN – 100 Czechs of Today series, portraying notable public figures.

Most of the lectures and speeches on spiritual topics have been preserved in available audio recordings.